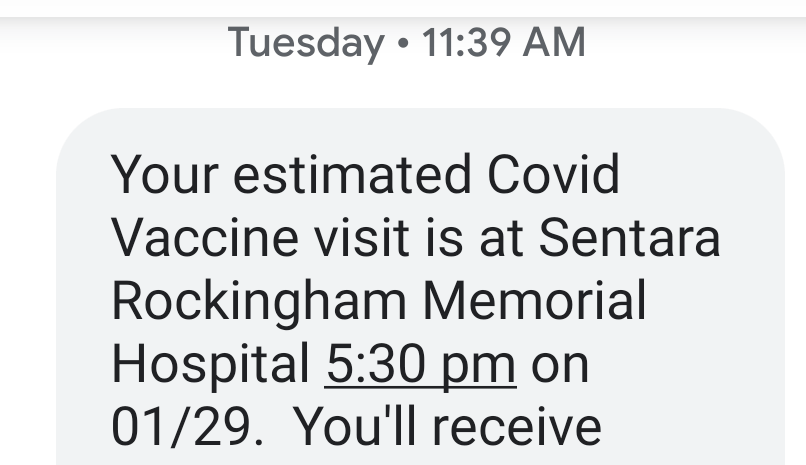 I arrived early for my COVID vaccine appointment at Sentara Rockingham Memorial Hospital. Excited that I was going to be part of this roll out of the vaccine, I was already strategizing in my mind about how to get the vaccine out to Black and Latinx communities when the larger roll out began. Two weeks earlier I had filled out the online public health survey to get a place in line for the vaccine; giving information about my age, occupation, health status, etc. This week I received an email inviting me to sign up for an appointment. I completed the appointment form and received a confirmation. As I sat in my car I received a text message:

I entered and was directed to the lower floor COVID Vaccine Clinic. To read in detail about how this all played out you can see the section at the end of this article. Suffice it to say, I had an appointment, was “screened out” by the white woman in charge, who then called security to escort me from the building.

I left and when I get outside I’m shaking. I’m shaking with anger and I record this Facebook live:

But here is the important part that I can face after having processed. In the video the reason I stated that I didn’t fight harder, didn’t get salty, and in general didn’t advocate more for myself is that “I’m classy and I have home training.” But that is a lie. I was lying to myself. Because the truth is I was scared. I was scared that this was going to escalate and the only person who would be hurt is me. I was alone and faced with 3 security officers and a white woman in power I chose safety.

Because a brown woman advocating in the face of a white woman’s power and fragility has NEVER gone well for the brown woman when security officers are involved. The truth is that it was my own internalized colonization that said a brown woman loudly advocating for her own health meant that I was “low class” or that I was raised poorly.  Because that is how we’ve been conditioned to see ourselves. A white woman in that same situation would have been seen as the hero, sticking up for herself, and asking to see the manager all the way up the chain to the head of the hospital. She certainly wouldn’t have had security called to escort her from the building. But here’s the part that changes lives…she would have been given the vaccine.

So as we talk about the disparate health outcomes of COVID:

we also have to also talk about the disparate health implications of who gets vaccinated and who doesn’t. Because I can guarantee you, mine was not the only experience like this and won’t be as we go forward.

So instead of saying you are sorry this happened to me, instead I invite you to ask yourself how are you going to make sure it doesn’t happen to anyone else?

I stood in line behind a white woman who also announced she was early and “Kim” who was checking in people laughed and found her name on the list of appointments and invited her into the clinic. As I approached, I laughingly admitted I too was early and gave my name. She found my name on the list and then looked at me closely “are you an employee of RMH?” she asked. I said no, I was part of the roll out to community clergy and raised my ID badge to show her. Not even looking at the badge she began shaking her head, “no this is for RMH, community health, and community services personnel only.” I said I believe I fell in the community services category as I had indicated my occupation on my online sign up. Perhaps there was some mistake, would she like to see my email and text confirmations? She shook her head and said no they weren’t doing clergy yet. I asked if there was someone I could call to get this figured out and she said I should call the health department.

Calling the health department, they said that since I had the confirmation email I should show that to the check in desk and show them that it hadn’t been forward to me but that it had my name on the “to” field. They said some folks had been forwarded emails that weren’t for them but since I had the email plus my confirmation that would be sufficient. Back I went to Kim and relayed that info. She said “no, that is not right. They gave you the wrong information. Fraudulent, well not fraudulent, but wrong emails have been sent out from Ms. Morin’s email and this was one of them.” Ok I replied could we please contact Ms. Morin and get this sorted. She said I was welcome to google her number and call her. I tried to do that with no success so asked if she had the number. She said no, Ms. Morin works out of the corporate office in Norfolk. I said “Great, that’s more info that I had just a few minutes ago, that’s very helpful.”

I walked back to the café area and was able to get the phone number for Ms. Morin’s office. I spoke with someone in her office who said they would instant message her, they came back and said they would take my info and they would either be able to get back to me by 7pm or on Monday. I said that’s fine, I had driven 40 minutes so it made sense to wait a bit to see if they could get back to me or Kim. I went back to Kim and gave her an update and let her know I’d be waiting over in the café area if she heard anything. Kim was very agitated and said “I don’t have a vaccine for you today. If I give it to you then I can’t give it to someone else on the list.” and I said I’m not certain how that could be because I was ON the list so they would have had a supply for me as well. She became flustered and turned away from me.

I walked back to the café and sat down. This is where the whole thing went off the rails. But before I relate to you what happened I have to say this….I don’t care that I didn’t get the vaccine that evening. Clearly an error had been made somewhere along the way. I simply wanted to figure out where the error was (was I at the wrong place perhaps?) and how it was made. This would help me advocate for getting me to the right place as well as give me information that could help others in the Black and Latinx communities I advocate for when they were going to access the vaccine.

Ok, back to the hallway of the café. I’m sitting at a table and a security guard walks by. He goes out of his way to make eye contact with me and say “hi” and I say hello in return. He proceeds down the hall and stops at the checkin for the vaccine clinic. I’m paying attention to him the way I always do with law enforcement when I’m the only Latina woman in sight. Sure enough he comes back now joined by another security guard and approaches me:

Security Guard #1: ma’am is there a problem here?

Me: I’m not sure what you mean (I look around to see if there is a disturbance), do you need a minister to deescalate a situation?

SG1: no, I’ve been told that you refuse to leave.

Me: I beg your pardon, are you serious?

SG1: Are you refusing to leave?

Me: I can’t believe this, now I’m going to have to start recording this

SG1: I’d prefer that you don’t do that

Me: I’m sorry that you’d prefer that I don’t but I have a right to do so and I’m going to

SG2 to SG1: don’t say anything else to her, let’s just call the back up and the police

SG1 to me: is it true that you refuse to leave when Kim told you to?

Me: no one has asked me to leave. I am a clergy person who has come for my vaccine, there is a mix up with my appointment and I’m waiting here for a call back from the person who Kim told me to call. Would you like to see my appointment confirmation? (I show him the email invite, text messages confirmations as well as my ID badge.)

SG1: oh, well, yeah, that’s the same kind of message we got when we got our vaccines. I can see how you’d be confused. Our job here is to make sure there isn’t a problem with “access” at the hospital. So it seems like they don’t have a vaccine for you tonight so we need to make sure that access isn’t a problem.

SG #3: shows up (ostensibly this is the back-up, so now it’s just a matter of time for the police)

Me: You are welcome to go confirm with Kim that 1) I have an appointment for the vaccine 2) that she was the one who is denying it to me and 3) she is the one who told me to call Ms. Morin’s office. That is what I’m waiting here for, a call back.

SG1,2,3 all walk down the hall to Kim and confer. I can hear Kim’s raised agitated voice.

SG1: Kim is going to go check her email and cell phone to see if Ms. Morin has called her just to be sure we’re not missing anything.

SG1: Kim hasn’t received any word from Ms. Morin’s office and says that she will not vaccinate you even if she does hear from them. So we need you to leave.

Me: Fine. I’d like to get a recorded confirmation from Kim that my name is on the list and that she is denying me the vaccine.

Kim: Yes you are on the list but I will not give it to you. You have not passed the additional screening.

Me: that’s all I needed to know. I’ll leave now. And I left.

2 thoughts on “I was denied the COVID Vaccine and then they called security to remove me.”